An attempted blog on films: Ishq-in-progress

With the confidence that behoves the daughter of the family who visits home once in a while, I switch the TV from the usual entertainment channel to one that presents music. A black-and-white image fills the screen and — I’m not being precious using the archaic word here — the air fills the big drawing room. “Dil jale to jale, gham paley to paley, kissi ki na sunn, gaye ja…”. Lata’s voice.

A father (aged 75), an uncle (73) and another uncle (70), respectively on their way to breakfast, preparing the dog’s food, and tightening a nut in a recalcitrant pressure cooker, stop in their tracks.

“Aahhha”, says my father.
“Sheila Ramani”, chorus my uncles in unison.
“Sheila Ramani”, my father nods to himself, as they all take a couple of slow steps towards the television.
“Taxi Driver”, one of them mumbles the name of the film.

A moment later they have to almost physically shrug off the spell. “She used to live near our house in Sundar Nagar”, says the youngest uncle. “No no, you are forgetting, that was Erica Lal”, says my father. He turns to me:
“Wo… jisne Waqt mein gaana gaaya tha, Anglo Indian thi shayad, smart thi…”
“Aage bhi jane na tu”?
“Haan, that’s the one”.

Then they resume their routines. My father humming Aage bhi jane na tu, my uncle whistling Dil jaley to jaley, and the youngest uncle shuffling sideways, the spanner in his hand, still gazing at Sheila Ramani with a smile. “Waise heroine Kalpana Kartik thi”, he tells me. Then he giggles. “Hum sab Dev Anand jaise baal banate thhe”. This is true. Every family photo of my grandparents and their five sons shows varying specimens of male Saklanis with a big puff of back-brushed hair.

I grew up with the rainbow moods of my youngest uncle, each manifested in a film song or a life situation worthy of the big screen. Chacha in despair, repeatedly listening to “Ye to pattharon ka shahar hai, yahan kis ko apna banaiye” on a Phillips record player. Chacha on his second pre-lunch beer, thrilling to the critical moments of Jab Pyaar Kisi Se Hota Hai, annotating subtleties we would otherwise have missed: “See, see. Anyone would say, take her and elope. But he is not going to do that… that’s the thing… You people won’t understand”.

And Chacha, reliving his own cinematic life with the pre-dinner whiskies, to rapt nieces:
“I said to her father: ‘Mr Verma, go back, I give you my word, Rita will marry the man you wish’. That evening I told her: ‘Rita, I have given your father my word’. She said: ‘Raju, if you ask me to, in so many words, then I will marry that man’. And i said it. Yes. I said it. I told her: ‘Marry the man your father wants you to’. And she only said one thing: ‘Promise me you will come to the wedding’. I promised her. And so, now, i had to live, till the wedding…”

Fortunately, growing up saw no attenuation in the filmy chronicles. “Aur, Meena Kumarrreeeee?”, Amit would sing out whenever he saw me with my hair loose and a drink in hand, which, in JNU, was very often. We would sing Hai hai hai ye nigahein and Aankhon mein kya ji. We would sigh to a much-worn cassette of Asha Bhonsle, and its Jaiye aap kahan jaaenge. And fall respectfully silent when Rafi reached the high ranges in Khoya khoya chaand. For friends who got their very first guest-lecturer jobs in Delhi University’s evening colleges, we played Wo shaam kucch ajeeb thi. And when the fellowship money finished and we were reduced to the hostel daal-chawal, Jayant and I invented Meat na mila re mann ka and Raat haddi ek kabab mein aayi.

Some time back, my friend Anita organised a screening of a well known documentary on Guru Dutt in her house. Many of us flocked to her TV. Anita was ideally suited for the job because, as a non-Hindi speaker raised in Britain, she was merely doing this docu-watching as an intellectually elevating exercise, not as pilgrimage. She could get us tea or answer the door while we sat, in front of those Midas black-and-white images, turned to gold.

At some point she gave up the documentary altogether. It was much more fun to turn her back to it and watch us instead. Ooooooh, we crooned in unison as the camera closed in on Waheeda Rehman’s face in sync with Chaudhvin ka chaand ho. We shook our heads at this too-muchness of the universe. Aaaaaaaah, we breathed as we saw Meena Kumari, toe to top, her splendour saturating the screen and poor Bhootnath. We caught our heads in our hands and repeatedly explained how lost we were for words. “Oppphhoooo”, we caught our tongues in our teeth when Madhubala smiled. “Arrrrrrrre”, our heads flopped backwards and had to seek rest, when Guru Dutt hummed “Ye hansste hue phool” to the grass. “Ye duniya agar mil bhi jaaye to kya hai?”, and we had to close our eyes and blink back the tears.

My world is full of people for whom movies may mean anything ranging from casual reference points to joyous and passionate engagement, to the very stuff of life — and often all.

A teenaged Bunty in the 80s, sitting in black despair on the footpath in front of Archana cinema, because coming out of a film, daily life seems so bleak.

Shomo, not being able to even speak when he hears the misleading rumour that Dilip Kumar has passed away.

Ami in college, listening to "Tum apna ranj-o-gham, api pareshani mujhe de do", wondering what it would be like to love someone so much.

Mumma, having furiously cleaned the house in Tanzania in an all out war-against-tropical-insects, finally sitting down with a sigh and a cup of tea, and suddenly choking as a cockroach makes its steady way down the hall towards her. She nudges me and points poignantly: “Chale aa rahe hain wo nazarein jhukaye”.

And Baba again, delighted when i reach home after many days in the metropolis — he is ready with my cokes in the fridge, and the fruit i eat, and the good-bread-you-don’t-get-nearby — kissing me repeatedly and warbling “Jaadoooooooo… teri nazar”.

Some years back, I went through a kind of depression. Among the people i could turn to was childhood best friend Bunty who rose to the occasion magnificently. Supplying me with just the right kind — and amount — of food, drink, money, books to read, pep talks, discussions of the future… he reached his most glorious exhortation at a critical point:

I have never been given a more precise roadmap in my life. With a little help from stalwarts like these (and friends like you who have actually understood the Sholay reference) i have followed Bunty’s instruction with single minded dedication, steadily turning into a one-woman multi-starrer blockbuster extravaganza.

Periodically it feels like i have “izzat, daulat, shohrat" as well as Ma. (PLUS, “teesre badshah hum hain”). 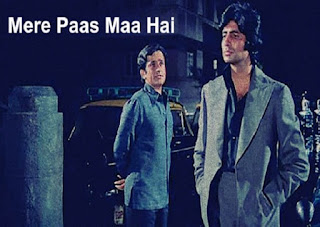 Postscript: “Is this too precious an ending for the blog?”, i turn to ask Ami, dropping some tea on the bedcover in the flow of my gesture. Ami knows what i will now say. We say it in unison: “Hum pee phi gaye, chhalka bhi gaye…” The question becomes moot.